Pretty dull month aside from nice prices on naglfar blueprints. 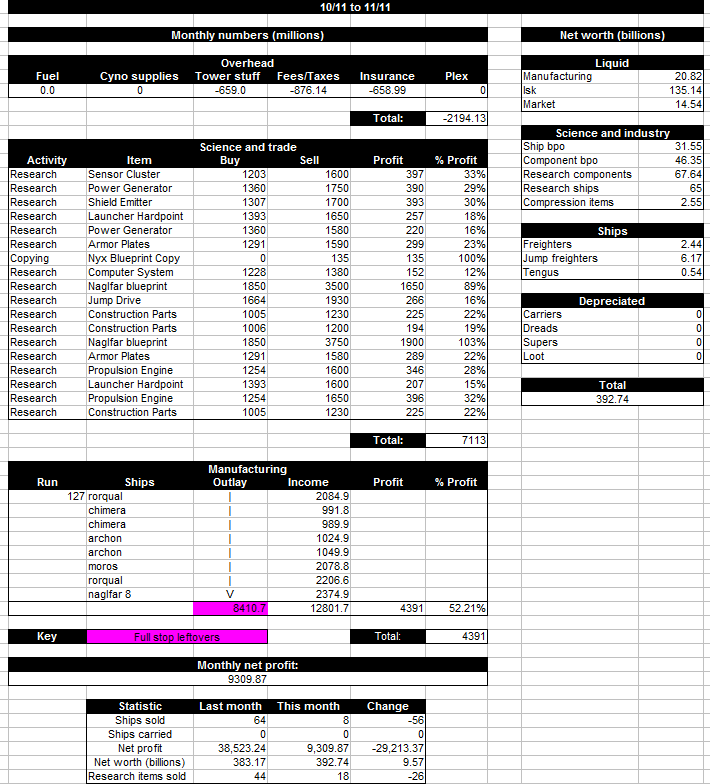 So when I started my little trade project, the idea was to calibrate the items I stock so that I would only have to restock every 3 months, minimizing effort.

This basically worked. I gave up after two iterations of adjusting quantities, but it was dead easy and it made money to the tune of about a billion per month. That's three billion isk in return for taking a couple JF loads of stuff to null and setting up 150 sell orders. I never even adjusted the orders.

I gave up for a few reasons:

1. Buying things, recording how much I paid, and setting up sell orders for more than I paid is too much effort.
2. A billion isk is only a return of about 5% per month. Sure I have a bunch of isk sitting around, but less than 10% is kind of shit.
3. Null systems where you want to sell stuff are full of elitepvp scrubs who are super interested in killing cyno ships. I don't have the patience to wait for them to get off the station.

Anyhoo, I'm done so I thought I'd share the items and quantities I was stocking and how well they sold. To view the list, click this link, click the "save the current version" button, and open the file in a web browser. It will look something like this:

At the time the list was saved it was 67 days from the time I last stocked the system. Red entries are sold out. Negative entries mean I accidentally bought more than I meant to.

Some of the items sold poorly due to competition in the system. Items were put on the market for usually 10-30% more than Jita price, but more in the case of some cheap items. The total value of the items I stocked was I think around 20 billion.

Also, the list of items is a modified version of k162space's list of high volume pvp items.
Posted by Parasoja at 2:09 PM No comments: