By the way, I totally take orders for capital ships

I get them every so often from friends, and it occurred to me that I might want to, you know, advertise. I love getting orders, because they give me a quick sale instead of having a hull sit on the market.

If you order a capital ship from me, you get the following:


I currently build rorquals, moros, revelations, and all carriers. To place an order, eve-mail character "ispia jaydrath" with the hull you want and a list of any mods or fuel you would like. All ships will be delivered in otanuomi, in northeast forge. Time from order to delivery will usually be less than 10 days.
Posted by Parasoja at 10:10 PM 3 comments:

Over the last month or so I've been thinking about this "start a second manufacturing process" idea, and I'm becoming increasingly less happy with it. Sure it would double my profit and open a second market, but I'm just not sure if I feel like it.

At the same time, it occurred to me that there is a compromise which can be made. I can easily expand my existing process to 5 characters (50 slots) just by increasing the number of blueprints in it. Conveniently, I have enough blueprints in research right now to do this.

The downside is that, since stations only have 50 manufacturing slots, it would be impossible to use 6 characters. However, I have a half-baked plan for using one of my characters to do evil, which would require it to be in a different corp, so that's okay. As for the problem of other people building in
my station, I figure that will resolve itself once I start filling all the manufacturing slots.


As for the current manufacturing process, it's continuing to expand. I recently added a second moros, thanatos, and archon blueprint, which puts the blueprint load at or slightly above what can be manufactured with three characters. Nearly all the duplicate component blueprints it needs are finished researching, too.


A few posts back I wrote about how I was having gaps between runs where component blueprints weren't being used, and how expanding my process to keep three of each ship in production at all times instead of two would solve this. I have arrived at a middle ground here, too, where component blueprints can be kept in production without putting so much more isk into minerals, by keeping two of each ship in production, plus one additional run (4 ships). I started implementing this a few weeks ago, and it seems to be working well.

If I do decide to go with a single 5-character process, it may be necessary to increase the number of ships per run to 5 or 6, just to keep the number of times per month I have to buy minerals down.
Posted by Parasoja at 10:52 PM 2 comments:

Haven't had one of these since my home server broke. Overlay of my three most-traveled characters. 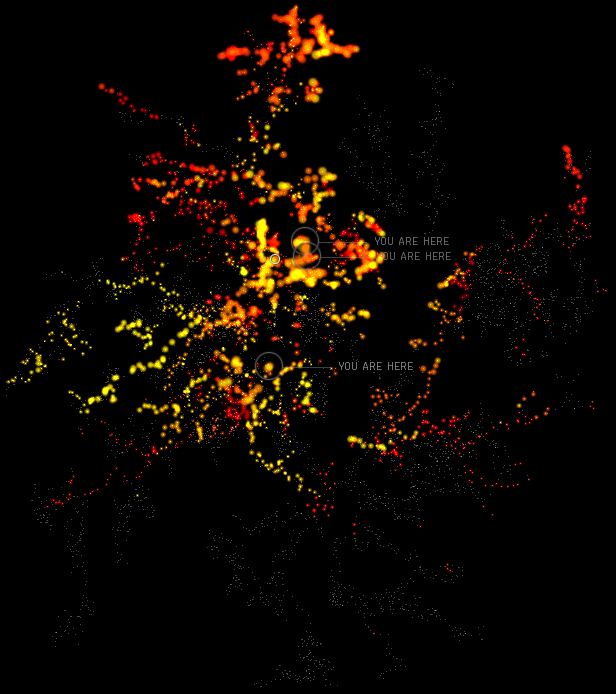 Buying researched ship blueprints, along with the standard background plex and a character transfer, ate nearly all my profits this month. Other than that there's not much new or interesting. I did move some things around in the 'net worth' columns, most notably moving my supercarrier BPO from the 'ship bpo 1' category to a new 'research ships' category. This means that the ship and component bpo 1 and A categories contain only the value of blueprints which actually have some bearing on production.

Two manufacturing runs are stuck long-term while I wait for naglfar prices to recover -- during the big capital ship price spike they were the last dread to come back down, and during the time where they appeared to be by far the most profitable dread, more people than the normal me-and-one-other-guy-in-the-entire-game built them. Now the market is flooded. 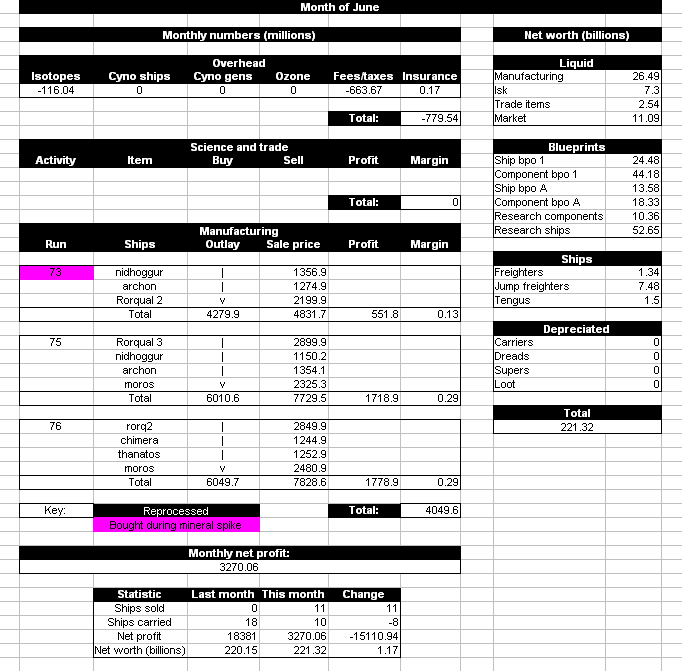