Went ahead and did it. Ran the tool, went through its' recommendations, and picked a few that looked decent. Shipped ~5b of stuff from amarr to jita using a pushx rush contract.

The a-type invulns sold exactly as expected, making me 156m.

Silos were selling for 18m in jita compared to 6 in amarr, presumably because of patch speculation. I sold 23 before prices crashed, sold many of them for a small profit, and also sold a dozen or so for sort of an intermediate number.

I sold 3 prowlers for a profit of 50m each, and then the price crashed to about buy price plus 10m. There are still 5 left on the market that I haven't spent enough time 0.01ing to sell, but I've decided to pretend I sold them at their present price and see how much I made.

The answer - after tax and so forth - seems to be that I made a profit of about 750m. This is not bad for the amount of work involved.

My takeaway is that in the case of the prowlers and silos, I bought too many -- silos were about 1/3 of jita's daily movement, while prowlers were about 1/2. In both cases they crashed to much lower profit margins before I could sell more than a fraction of my stock. In the future I should use more like 1/6th of the buying system's daily movement. The a-types which sold properly were 1/10th.

Also, when there's a profit to be made, expect to spend time 0.01ing, because everybody else is going to want in on the action too. Also, things that are dramatically out of line with historical values will probably tend to correct quickly. Unless there's an actual reason for it.

In terms of doing this more than once... yeah, probably. It would have to be my primary profession, if I was going to spend time 0.01ing. I might decide to take a month, do nothing but trade, and see how it goes.
Posted by Parasoja at 1:35 AM No comments:

I redid the equation I use to decide how many of an item are likely to be sold per day.

The first version was okay for high-volume items, but was bad at identifying items which sell less than one unit per day, which I don't really want to bother with. When I ran the trade finder many of the results were low-volume items that it thought I could trade and make a huge profit on, while actually doing so would have involved days of 0.01ing to sell a single unit.

The second version had the opposite problem -- it successfully ignored low-volume items, but thought it would be a super good idea for me to haul four trillion units of tritanium from jita to amarr.

So I put away the automatic curve fitter and did the variables by hand. Version three successfully ignored low-volume items, and thought jita moved about 15 billion units of tritanium per day. Huzzah.

Version four is version three with a flatter curve to make mid-high-range numbers more accurate. When I ran it for the first time the list of most profitable trades contained largely mid-range production stuff like ice products and PI or reaction materials, so I sighed and went to the game to get real numbers to compare with eve-central values... and it turned out the equations's numbers were correct. So I'm calling it good.

Also, I hadn't included taxes before, which resulted in the "profit" numbers it returned being inaccurate. If you move 4 billion isk worth of stuff for a before-tax profit of 150 million, the tax eats half of it. If you can move 1 billion for a profit of 149 million, that's a much better trade.

I guess this is the point where I do a trial run and see what happens.
Posted by Parasoja at 9:34 PM No comments: 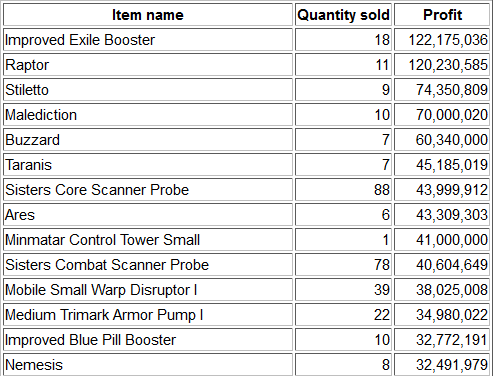 Another passive income month, refreshing orders every 90 days so they don't expire.

It looks like goons moved their staging point 1 jump away closer into my teritory (market hub proximity?). I dunno, it looks like there are more active players in the area where I am, including docked and undocked scouts. I'm probably not going to get my profit from these custom offices from PI this month, but it doesn't matter. 10k m^3 of p2 products is the limit of storage on my planets, so I'll first reach this number before I really get into it.

Blueprints haven't changed so far, but I am thinking about moving my off-character on my main account due to the price of PLEX.
Posted by Parasoja at 6:24 PM No comments: