State of the fail: Will WI survive?

Since the time period has passed in which a post I wrote analyzing whether WI would fail cascade would be relevant has passed I am now posting this piece in its' stead, about the current state of the alliance and whether it will go on.

Let's start with the blindingly obvious: WI has not escaped unscathed. From a starting membership of over 3200 we lost 500 players even before the first corp left. While I am hesitant to use the phrase "cutting out the dead wood" since it always precedes a fail cascade, it's pretty clear that these individuals were not going to be incredibly useful in a real fight.

About a week or so ago the first two corps left at the same time. They were not core corps, and one of them was apparently having something of a civil war with itself; nevertheless, this opened the flood gates and at last count a total of 5 corps have left, including 2 core corps. At this point I have to frankly admit that if WI survives, it will not be the same alliance that I joined. Mmembership is currently around 1500.

WI goes on, however; current orders are to deploy to ROIR and capital and subcapital trains have been moving multiple times per day, so it is clear that the (remaining) leadership has no intention at this time of leaving the Northern Coalition, though questions as to whether it might fold into an existing alliance, and certainly whether we have nearly enough members left to justify holding geminate, are uncertain to me.

On a personal level, the corp I am in was one of those core corporations that has left and is moving to empire. I, of course, am looking for a new corp. I'm applying to a few corps in Razor first, since I've been unhappy about the lack of communication from leadership during the space-losing process and because I don't want to join a corp only to have it leave the next day. If I can't get in one of the 3 or 4 that I'm interested in quickly I'll try for LSJV in WI, since it would be proof against my corp leaving the alliance again (Tomcat, the alliance leader, is in LSJV).

I'm actually a little burned out on EVE and would maybe like to take a break for a couple weeks. But, well, there's a war on and all.
Posted by Parasoja at 3:06 PM 1 comment:

On the internets today we have three items of note:

In relation to the Atlas war there are two accurate, well-thought-out assessments of why we lost... by our enemies! I had not thought this was possible. Props to Quesa and Czech Lion for not being douches.

A series of mind-blowing EVE fan art exists. Click it.

One Helicity Boson, the force behind hulkageddon 2, made the best post ever in an epic rant attacking gank victims/whiners for their own failure to take their fate into their own hands.
Posted by Parasoja at 2:07 AM No comments:

Nearly all my important assets are in lowsec at this point, for a total of about 15 combat ships, 2 capitals and a number of plexing/mining ships. Left behind were a pair of hulks, a poorly-fitted ratting battleship, a bunch of mods and a crapload of industry stuff (maybe half a dozen unfitted battleships I had built and probably over a billion isk worth of mins) that I can sell later without docking in the event that we don't come back to geminate.

Sadly, I got a carrier doomsdayed in the process (no, I did NOT jump to a cyno gen or use a jb). Fortunately, it was fully insured, not carrying anything expensive and the ship maintenance bay was empty; unfortunately, it had two cap mods and some fighters I forgot to remove before leaving lowsec. It's chill, though; what you learn from dying horribly is always worth the isk loss.
Posted by Parasoja at 2:38 AM No comments:

With the coalition focused on the tri war (even some WI are over there) there is at this point no resistance to atlas in geminate. y8r is lost and last I heard 04, k25, o2o and tde are are in the process of dying. Towers in p-e are reinforced as well.

EDIT: This is only mostly true. There have been some joint ops with razor, but it's a holding action at best; we don't have nearly enough combined numbers to put up a credible defense and it looks as though we may be staging a full-scale evacuation to support the war in Pure Blind.

The western war is proceeding apace. A capital fight is finishing up as I write this, in which we apparently did NOT kill a tri titan -- we had 8 bubbled, but they logged off and the 15 minute timer is far too short to kill many supercapitals before they disappear.

Wish we could get that sort of firepower over here; I'm working on getting high-value assets out. There's no doubt that the coalition could retake geminate in a matter of days, but they've picked Pure Blind for that type of effort. I'm still not sure why we aren't deploying there.

I'm going to go ahead and make a prediction: We'll be back.

03:02:32 Notify An outpost owned by Conflagration. has entered reinforced mode
Posted by Parasoja at 7:18 PM No comments:

A relatively small fight in terms of numbers - 150 on each side - saw us taking out 5 SBU that had been dropped, in 04- and K25. Losses were minor on both sides, though Bobby Atlas lost another carrier. I, of course, was absent again due to my time zone.

According to a recent ISD article, the war in the west is proceeding at a faster pace. It claims that there has been major fighting in p-2 and surrounds, with Tri taking the p-2 station and the NC recovering a large number of moons.
Posted by Parasoja at 12:21 AM No comments:

So later Friday evening there was a second formup. NC showed from various alliances for a total of about 300 subcaps. Hostiles brought 500. This is turning into a problem -- the NC getting outblobbed is new.

Anyway, there was some fighting, plenty of lag and a node crash.

Set up on the SBU waiting for the station to come out of reinforced.

Warped out in half structure, came back, got dragged by a bubble.
Right after this the node crashed and everybody got their ships back.

In the end we just didn't have enough numbers to accomplish anything and the station was lost. There have been accusations of shenannigans (CCP later admitted that the station having only 1 reinforcement timer was an exploit, but declined to do anything about it), but I think I'm going to just call this a win for the enemy on account of our not being able to do a damn thing.

Primary is the station. Target down.

As a grunt, I can think of three major issues we're having.

1: Give us targets. Calling targets over TS with 500 hostiles on the field DOES NOT WORK. We need a useful way to figure out who for our damage dealers to shoot. Sort by name works. Sort by distance works. Broadcasting works if somebody actually broadcasts.

How about sorting the fleet into 5 wings of 50 and having wing commanders broadcast to their subordinates? 50 battleships is plenty to alpha any subcap.

2: Numbers. We just don't have enough of them. I don't know what's going on in p-2, but it's obvious that this two-front war is taking its' toll on our fleets. I'm a nobody, but it seems to me that it might work better to deploy everything in one spot. Retake all assets the enemy has taken on one front, then deploy to the next trouble spot. If they did this and elected to kill Tri & co first while geminate burns, I'd be down with that... as long as the coalition - the entire coalition - came to clean up geminate when we finished in the west.

3. Bombers. Bombers don't kill things, but they force the enemy fleet off the field. We need a bomber squad.
Posted by Parasoja at 11:36 PM No comments:

We had a formup today right after downtime with the usual alliances from the NC representing, plus a couple dozen guys from Mostly Harmless. Hostiles were in system in y8r with 200 and another 100 in 04-.

We titan bridged to a deep safe and warped to the stargate/SBU, where the enemy HAC/BC force was camped, at range and engaged. I died pretty quickly (I think I aligned in the wrong direction, but it's hard to say), which is my first loss in this whole mess. Obviously, I'm quite happy about this.

After reshipping I bridged back to the system with a few dozen others. There were a few skirmishes, but nothing really noteworthy. After a few drivebys we left the field, being too outnumbered for a stand-up fight.

Via cloaky alt before I landed

From my main before getting podded

Posted by Parasoja at 5:51 AM No comments:

Sometime Thursday Solar dropped another SBU in y8r. We shot them a bit but Atlas dropped in with reinforcements and, outnumbered, we disengaged. They reinforced the station and a number of pos in system (jump bridges, cyno jammer). Tonight they killed the pos. Station comes out early tomorrow and we have a couple ops planned before then, presumably to try and take down the SBU.

It looks as though they're living up to their promise to keep going after new years. Same old same old so far... I wouldn't have bothered posting except I got a screenshot of an atlas cap fleet sitting in the wreckage of our pos.

Atlas and Solar took another poke at our space again today. Atlas dropped SBU in 04- and solar in y8r, which are adjacent station systems. We killed the one in y8r, somehow managed to titan bridge to 04- without dying horribly and ended up holding the system when they eventually decided to call it a day. Numbers in 04- were reported as 400, with 200 NC. RZR, MM and all the eastern alliances represented on our side, and Atlas and Solar, as always, were the hostiles (maybe some pets too, who knows).

People on both sides reported a fun and generally non-laggy fight. I don't have any information about kills/losses but it won't be a game-changer.

Now would you guys please attack us during the weekend? I'd like to get in on a fight every so often.

FAKE EDIT: Later that evening evening Bobby doomsdayed a friendly carrier at a pos then faked a disconnect. We scrambled ships to kill the titan and atlas hotdropped us, getting 8 capital kills. This is so awesome I don't even mind our being on the receiving end.
Posted by Parasoja at 1:24 AM No comments:

Shortpost today because it's an event that has been adequately covered elsewhere. What happened is that goons+PL jumped in a bunch of capitals to an enemy-occupied system, failed to load grid and lost 4-5 titans and probably the better part of a cap fleet in what may be the most significant event since the Bob disband.

I have to say, I have mixed feelings about the possibility of reimbursements at this point. On one hand, I'm rooting for PL/goons and the lag issue is retarded. On the other hand, the Dominion Bug is well known and jumping ships in like that - I'm going to go ahead and backseat FC here because it's so easy to call this - is a flat out grade-A fuckup. 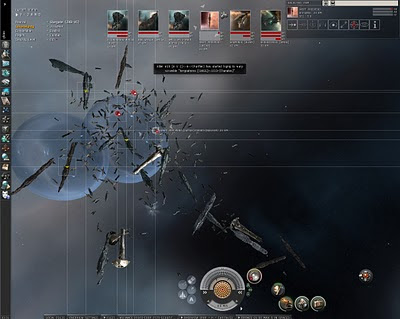