How many stars in the sky?

Ever since the new star field came out a year or so ago, I've been vaguely impressed at the number of stars that appear when you zoom the camera in. It has to be a repeating texture of some sort, of course, but it's still pretty impressive.

Today I decided to find out very approximately how many stars are in the sky box.

Step 1: Get a nice linear ship and an aesthetically pleasing patch of sky.

Step 2: With the camera aligned with the axis of the ship, zoom in.

Screenshots don't save the cursor position, but I was able to use UI elements as landmark. The answer is about 160 pixels, so with a 1650x monitor there are 10.3 screen-widths in a 45 degree arc.

Step 5: Find the surface area of the sky sphere, measured in screen-widths.

Putting 'sphere circumference 82.4' into wolfram tells us that the surface area of the sphere is 2161. 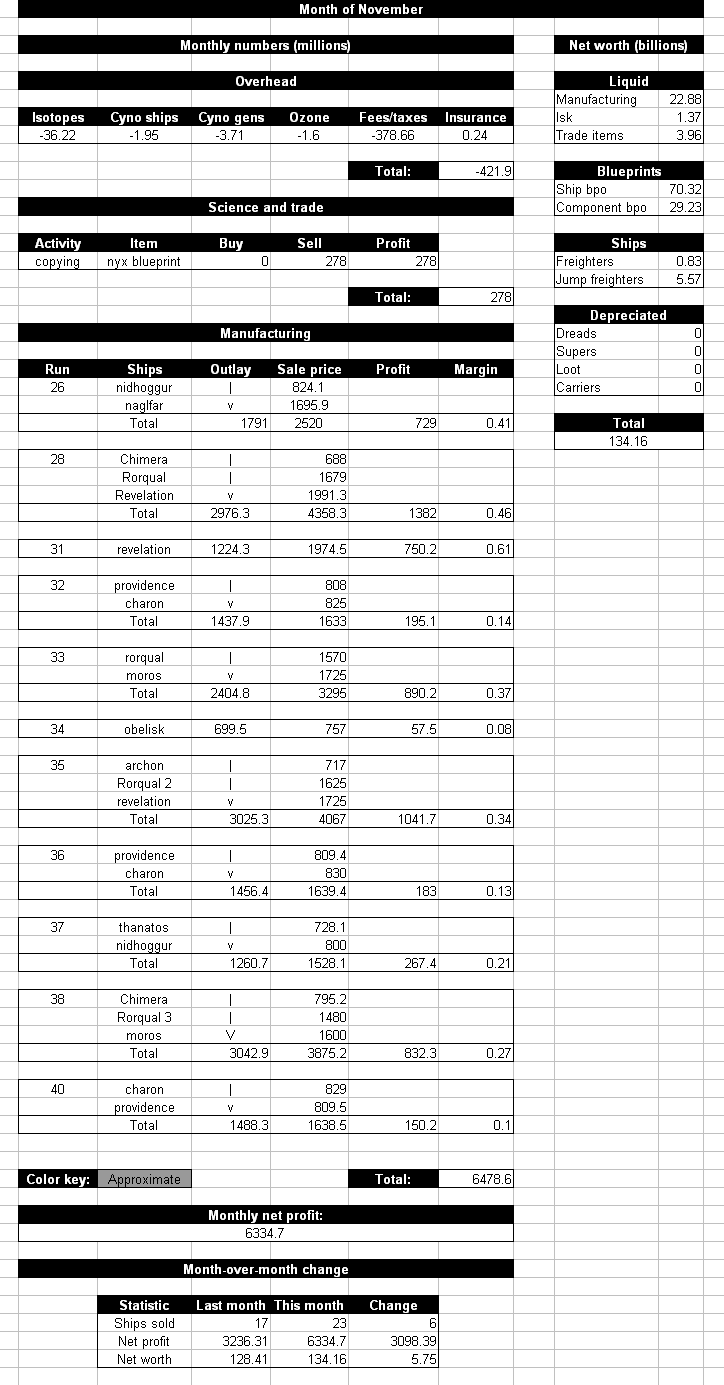 Told you this would be a good month ^_^

I think next month will be a good month too. Probably not as good, though.
Posted by Parasoja at 3:17 AM 1 comment:

An update that almost means something edition.

I just put up a buy order for minerals for another run of capital ships (run 47: chimera, nidhoggur, rorqual, naglfar). This is something I do a lot, but this run is special because it means that for the first time ever I have two of each type of ship I build in production at the same time ('production' starts with buying minerals and finishes when the hull is delivered) .

It would have taken a few more weeks for this to be the case, but I've stopped production on obelisks and, more recently, thanatos, because there's no profit to be made in them at the moment. Thannies have had low margins for a long time, probably because they're the ship that every new capital builder wants to make (EDIT: Or because they're shit), and after the oxygen interdiction hit the margins dropped from below-average to nearly zero . Not sure why obelisks are having a problem, but freighter margins are never that great.

Below is a shot of my blueprint/run status/priority/margin/run mineral cost tool. You know, because that sort of thing is interesting.

Right click and view image or open in new tab for full (grumble)
EDIT: I was looking at that and noticed that the profit figure seemed off. Turns out the tax modifier was in the wrong place. Correct profit numbers would be 17 mil for thanny and 5 for obelisk. Margin is still correct.
The total value of minerals in my manufacturing process right now, including three hulls currently on the market, is 24 billion.

Now that manufacturing is fully funded, I plan to move forward with my other projects soon (tm). The first thing I'll be doing is researching replacement capital component blueprints, because my current set sort of sucks. Planning to set up a small tower (to start with, anyway) for this, so I'll wait for the fuel block changeover before starting.
Posted by Parasoja at 10:40 PM No comments:

Signal boost because manly tears.
WinterUpdate by DavidKMagnus
Posted by Parasoja at 11:29 PM No comments:

The first naglfar rolled off the assembly line in my new system. They use some capital mods that I hadn't been stocking already, so I figured it was time to get around to properly stocking the system. So I did.


The goal is to stock enough of each mod to fit 2 ships that use them, and just restock whenever I bring in minerals for a new production run. This loadout does that, though I am thinking of switching up to 20 of each type of fighter.

One interesting thing is that isotopes sell pretty quickly. At first I brought 100k of each type, but they sold in a matter of hours at a 20% markup over jita. So, I switched to 400k units and marked them up 30%.

In theory there's an opportunity to make a semi-meaningful profit there, but I'm not a trader; I'm providing isotopes in order to make the system an attractive place to buy a ship, not to supply people who already own them. I figure I'll increase the markup by 10% each time until they sell slowly enough to not be a bother. A large markup should prevent people from buying hundreds of thousands of units just to have a stockpile, but to somebody buying a few tens of thousands of units in order to move a ship somewhere it doesn't represent a significant amount of isk.

In other news, manufacturing is going pretty okay. I predicted this would be a good month, and it has been. I haven't sold as many ships as I would have liked, but after the recent price spike when crucible changes were announced I started building dreads flat out. They're slower to build than carriers and the occasional rorqual, like I was doing before, but they make up for it with larger margins.

Unfortunately, the price spike seems to be starting to wind down. Phoenix, moros and (arguably) naglfar are peaking now, the last ships to do so, while everything else has started to come down. Fortunately, I'm ~clever~ and started to prioritize phoenixes, moros, and naglfar when revelations were peaking, so hopefully I can catch those spikes and make next month as good as this one.
Posted by Parasoja at 1:17 AM 3 comments:

"I'd better get this one out of the way before the game mechanics change" edition.


"eve how long does it take for supercarrier to kill carrier"

About 100 seconds... assuming no lag, rainbow bomber damage and that the carrier is not running a local rep.

The longer version is that a carrier has about a million hit points, and a nyx does about 10,000 damage per second. A carrier can generally rep a thousand or so damage per second; however, a triage carrier set up for local rep can rep a lot more, usually enough to tank one supercarrier.


"what does it take to take down a carrier in eve?"

See above. Carriers have a million hitpoints and can rep 1-3k dps, or up to 20-30k while in triage. If you can find a solo carrier, you can probably get away with logi and a couple battleships with neuts fit.


"eve naglfar what is it used for"

Yes. Sort of. More precisely, it is possible to prevent a doomsday which is activated on you from landing.

When a doomsday is fired, it takes about 30 seconds to land. If you have effects on you can see the doomsday effect hitting your ship shortly before the damage is applied, and have a few seconds to GTFO. If you manage to get off-grid, it effectively "misses."

It is possible that if a doomsday was activated on you the titan would start redboxing without there being a guns hit/missed notification. I can't confirm this, as it's understandably difficult to test, but if true it may be possible to use a titan overview to detect incoming doomsdays.

When titans are used against subcapitals, logistics, T3, fleet boosters and expensive ships (e.g. machariels) are prime doomsday targets, so their pilots try to detect doomsdays being activated on them and warp out when it happens, resulting in the doomsdays being wasted. T3 in particular can use interdiction nullifiers to make themselves immune to bubbles, and I believe this has been used as a tactic wherein nullified friendly T3 are deliberately bubbled to bait enemy titans into wasting doomsdays.

If you're in a capital, jumping out works too -- once the jump command goes through, you're safe. I once jumped my nyx out with 17% armor left and three doomsdays running on me, which would have killed me if they had landed.
Posted by Parasoja at 10:52 PM 4 comments: