...at least about the stations. Attacker advantage holds true for pos since they only have 1 RF cycle and aren't worth the same sort of logistics we used here.

Sometime Tuesday or Wednesday Atlas gave the order to stand down. Nobody has said exactly why, but it looks to me like NC leadership had adapted to the current lag issue and spent the last several days bridging people into the system and having them log off at safespots/pos. Really wish they had fought, but I guess that wouldn't have been good for their morale.

According to more rumor on SHC, round 2 is scheduled for after the new year. I hope it involves goodfights.

Credits to Polymer for the screenshot. Click to expand.

Yes, that is 9 titans on a stargate. Watch this space for my "NC guide to supercapitals" !

Posted by Parasoja at 1:47 PM No comments:

Today the enemy got in system first - we formed up 3 hours early, but that's already well into russian prime - so instead we went out and reinforced a tech pos. By the time we were heading back to base the report was more than 500 red in y8r and another hundred or so heading in that direction.

I present to you: A failsafe way to take a station system.

1. Have a spy in the enemy alliance.
2. Get 300+ battleships in system.
3. Every time the enemy has a formup, log everybody in. Any force entering the system will be slaughtered, no matter how large.
4. Take the station.

In other words, the lag issue favors the attackers because they can pick a target where the enemy fleet isn't, making defence impossible. Once both sides have assets in the region of conflict (e.g., 2+ stations) the war will turn into station ping-pong with no fights.
Posted by Parasoja at 11:33 AM No comments:

Solar Fleet reinforced the Y8R station on Christmas. This morning we formed up at 1600 to save some towers in 9-k, got that done and titan bridged into Y8R along with many of the other NC alliances; I've seen RAGE, ME, MM, RZR, and Stella Polaris, and TCF were said to be present as well. The enemy forces are Atlas and Solar, who are now allied, plus various atlas and possibly solar pet alliances. Additionally, AAA were reported in p-e during the fight, Red Alliance apparently had 160 in 04- for a while - not sure what they're doing - and Tri was in local as well though I don't know if they're participated in the fight.

When we jumped in local hit 1160 and scrolling through the player list the numbers seemed to be pretty even. This developed into a fairly significant loss for us, with local down to 640 and probably 2/3 red.

The lag was okay for me; system loaded, grid loaded... module activation quite delayed, as expected, and lots of ghost ships. Once angain though, many people report not loading grid. Epic whine thread in CAOD has 190 posts in a few hour even though people should be used to it by now.

I'm somewhat puzzled about why we weren't in system first. Either command elected to save the 3 towers (including jb, cyno gen, tech moon) in 9-k instead of the station -- which makes sense, I guess -- or the coalition hasn't yet learned that being in system first is the only way to win and used a fail formup time. I'm also puzzled as to why we jumped into a hot grid instead of at a tower so people would have a chance to load. That I don't have an explanation for.

It looks like this is developing into a real war. Should be epic.

GF anti-NC coalition.
Posted by Parasoja at 12:31 PM No comments:

Apparently, the market is going crazy

Full disclosure: This post is basically lifted from K162space, which prompted me to check the market.

I'm not generally somebody who tracks the empire markets closely, since I haven't spent any time there since mid 2008, but dominion has buggered it in ways I've never seen before.


The amount of R64 mins needed to manufacture T2 items was reduced, a lot. In addition to this, the amount of technetium needed has been increased a lot. With all the recent fighting for technetium moons (atlas get off my lawn!) they're spending a lot of time not producing, which means supply has dropped as well.

T2 prices have skyrocketed. Hulks are selling for 185 million in jita, twice their historical value. Dysprosium is down at least 75%, technetium is up more than 2000%.

[EDIT: click images for non-blurry version, this thing resizes them for some reason] 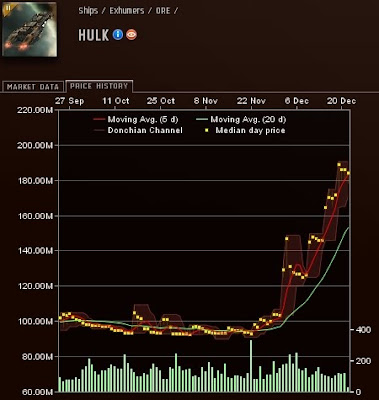 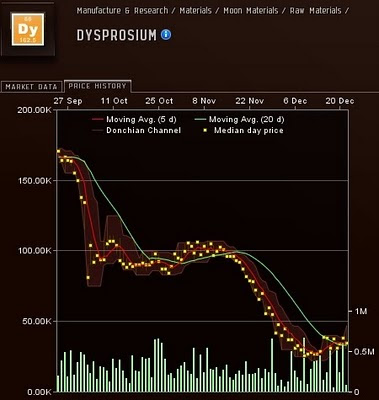 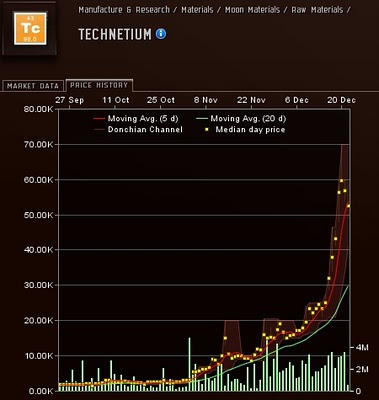 Dominion also added hidden belts in any system with the appropriate upgrades, so now everybody in a player outpost has access to bistot and arkonor. Megacyte is dropping fast and looks to be headed for historic lows. Perhaps ironically, T1 ship prices are likely to drop below their current extremely low prices. It makes me wish we didn't have all these wardecs on; there's never been a better time for hulk ganking. 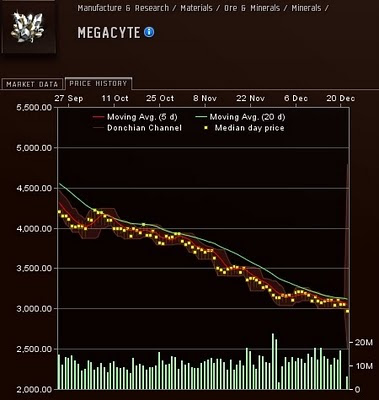 A fleet battle of moderate significance went down in K25 today. The political picture is fuzzy, but it looks like Solar Fleet has decided to take another shot at taking K25 and Atlas is supporting them. It could be the other way around, but I doubt it.

Killboards are fucked sideways of course and haven't even finished syncing, but it seems to have came out as a handy win for the NC. It wasn't the abject slaughter our two fleets experienced at the onset of hostilities (people on both sides mostly reported that they could lock targets and their guns worked) but we managed at least 20 capital kills and a 5:1 ratio in battleships. The forces involved were Atlas+Solar Fleet+Red Alliance (337 ships) vs Wildly Inappropriate+Razor+Majesta Empire+Morsis Mihi (350 ships), with a number of people being counted on both sides or the wrong side due to smartbombs, etc.

Solar has a long history of poking at our space, this being the third time this year they've tried to take K25. The first attempt culminated in a battle with 500 in local (they brought a number of Stainwagon alliances), the second ended when Razor hotdropped Solar dreads just before downtime (screenshot below). Them and Atlas working together is more than a little worrisome; WI by ourselves could probably take on Solar, but the only way we can hold out against both is with heavy support from allies.

EDIT: According to the highly reliable posters of CAOD, Atlas and Solar were not working together; Solar started the fight and Atlas decided to drop in uninvited. 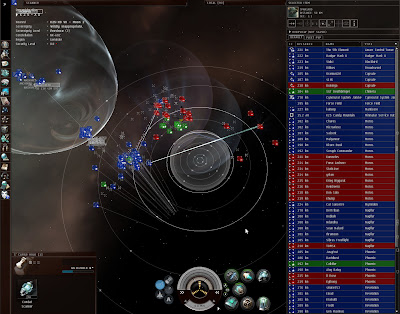 Posted by Parasoja at 1:48 AM No comments:

Breaking news! Abathur, most beloved of devs, has suddenly resurfaced and brought to us all things which are good.

All this and much, much more, coming in Dominion 1.1!

This is very good news for me personally. Although I won't be deploying a mothership any time soon, the Naglfar boost means I don't have to train Amarr in order to have a useful dreadnought like I was planning.

I probably still will though, since Amarr carrier best carrier; but now that the minmatar have a dreanaught again it's not crucial that I spec for a third(!) race's capitals asap.

Hey guys, there's a war on.

When I began to think about starting this, the only threat to WI was from the "west geminate coalition", a handful of little-people alliances whose stated goal was to remove WI from geminate. Since that time two things have happened: First, the WGC has apparently fail cascaded and I haven't heard anything about them or Cry Havoc (a separate entity?) in weeks. Second, we're being invaded by Atlas, which is an actual honest-to-god threat.

The thing so far:
The conflict opened with WI fleets jumping into Atlas twice. Combined with an issue with most people who jump in failing to load grid we lost hilarious numbers of battleships for essentially no kills.

The new face of alliance warfare:
The jumping-in-is-suicide issue means there haven't been any fights so far. Defending our assets means setting up in the system with as many people as possible hours before a moon comes out of reinforced and just sitting there. The enemy don't jump in, we rep the moon and leave. Typically they form up during the op and reinforce a moon in some other system.

The score:
We've lost several (5?) technetium moons, each apparently worth 3 billion isk/month (more on this later). Atlas is making no attempt to take stations. There have been minimal ship losses on either side; our worst since the initial suicide fleets was some idiot caught ratting in a T1 fit golem during a CTA, though we've also lost one or two carriers to titan drivebys.
Posted by Parasoja at 4:46 AM No comments:

For anybody who stumbles across this, the posts here pertain to the hopelessly nerdy internet spaceship game EVE Online. Just smile, nod and move on.

Item one: Clairvoyance and delusions of grandeur
This is a fail blog which will never be posted in because my eve life is so boring. Nobody will read it and it will be abandoned entirely after a few short months.

Item two: Scope
This is a personal journal. It will be about things that happen to me including successes, failures, what I'm doing and why as well as commentary on fights and current events. I will be surprised and disappointed if anybody reads it.

Item three: The past
As this is a journal, I will take this space to briefly cover everything that has happened to me previously.


To date, every corp and alliance I've been in has fail cascaded in a year or less. Currently I'm in an excellent corp in a decent alliance (lol-WI. all you want but we have competent and motivated people at all levels), so we'll see how that turns out.