My favorite thing about building capitals is that I don't have to be at the keyboard for most of it. If I don't feel like logging in for a few days, I just don't; even if ships are finishing or I should really be buying minerals for another run, skiving off just delays future profits; and I'm at a point where money is pretty much meaningless so long as I make my 2 plex per month.

Trouble is, I'm spending more and more time not feeling like getting things done in eve. At the same time that extra component blueprints are finishing research and increasing my capacity to build ships, I'm not feeling like moving minerals into place to take advantage of those blueprints. Neither am I thinking about eve at all in my spare time.

Hum. Odds are it's a passing thing.

As for capital manufacturing:


Rorquals have historically been a very good ship to build, so I added a third rorqual BPO here. Spare component blueprints are finishing research and coming available, which should increase my manufacturing capacity. Thinking about adding a second archon and second moros here as well.

Process A (starting up):


Still looking for 2 archon and 2 moros blueprints. The first component blueprints here are starting to finish research, but I don't expect to install the first manufacturing run for about another 2 months.
Posted by Parasoja at 7:41 PM 5 comments:

The response from the community is varied, of course. Mabrik, one of the actual targets, decided to take the radical step of watching local once the wardec went live. Three days later, he eventually saw one war target. The rest of the blogosphere, sadly, has not been so reasonable: Yuki Onna, one of the other targets, quit the game and closed down his and/or her blog. Mord fiddle, formerly respected nullsec commentator, has elected to sperge about mittens "silencing and driving out" dissenting voices, and even went full tin foil retard over the "Oh hey, we didn't actually mean for it to be possible for an unlimited number of entities to be at war with another entity forever for free" changes.

Get some perspective, people. Mittens has no ability to shut down your blog or make you stop playing. Yuki was not silenced or driven out -- he and/or she decided to ragequit instead of making the effort to adapt.

Since it apparently, somehow, falls to me of all people to be the voice of reason, I do hereby welcome the rest of you delicate flowers to eve online: A game in which sometimes people do bad things to you. The basics are as follows:

1. Sometimes people do bad things to you.
2. Use your damn brain and adapt, you pansy.

As for "standing together", I can stand perfectly well on my own, thanks... and from where I'm standing, I can see the rest of you running around like chickens with their heads cut off. It's hilarious.
Posted by Parasoja at 6:19 PM 9 comments: 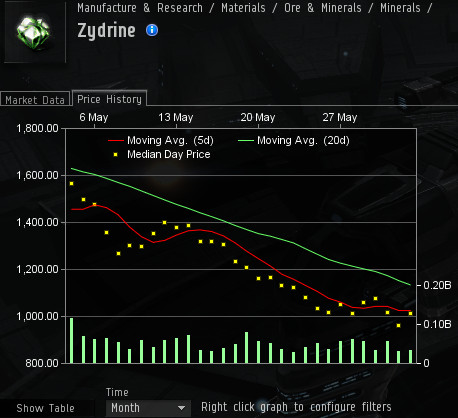 Of course, the price is still higher than it was before the announcement, and it may well remain so. Assuming Guilane cashed out today instead of continuing to chase a sunk cost, he has made a net profit of around 2 billion.
Posted by Parasoja at 2:43 PM 4 comments: 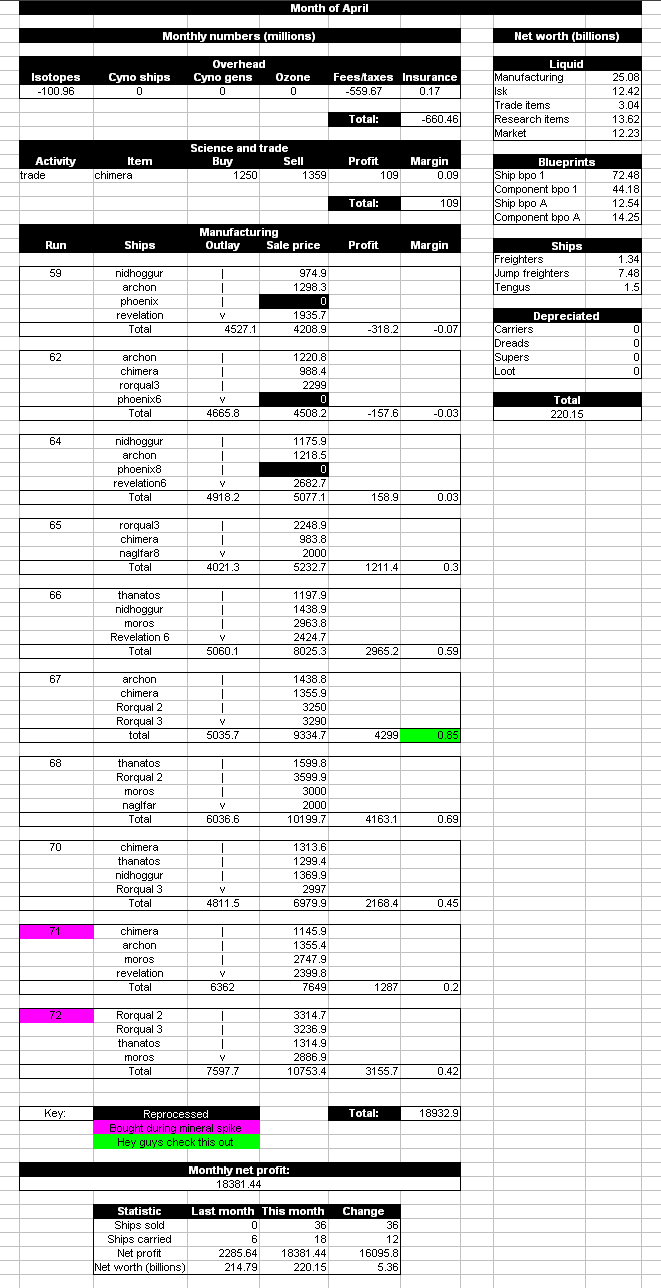 Capital manufacturing update: In which I run out of research slots

I've been trying to clear out product, with a fair degree of success. This has left me with quite a lot of liquid isk, so I decided to buy the remaining component blueprints for my second capital manufacturing process. There were seven of these.

Turns out, though, that between all my characters I only had 6 research slots open. I haven't really thought about that as a limiting factor until now, and I still have 7 ship blueprints to buy.

Nbd though. In this job I'm used to waiting. 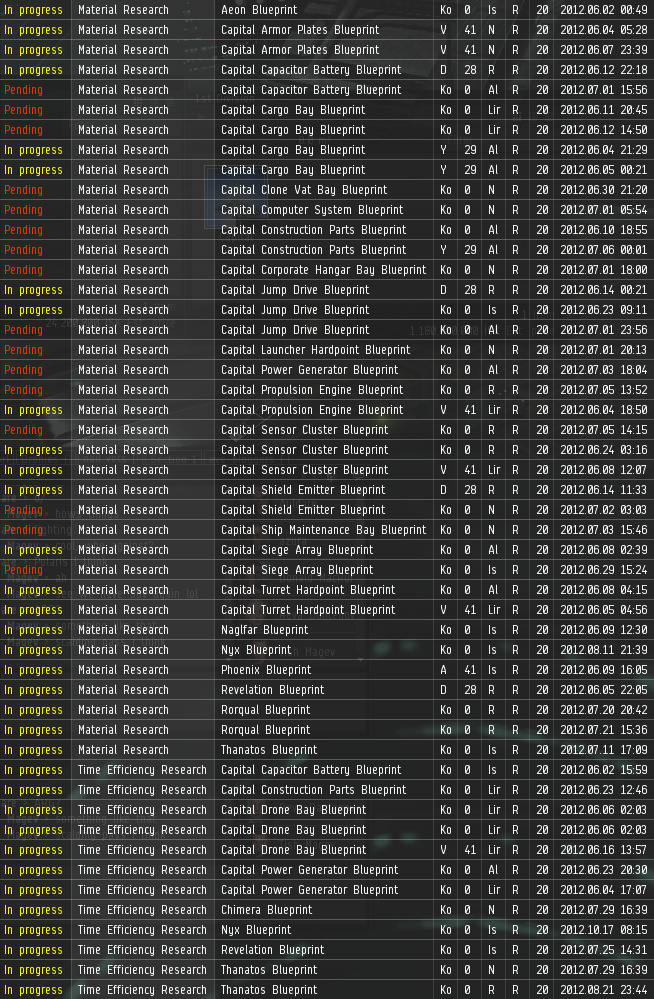