I have established that NPC null systems are going to be a very low volume market. Extremely preliminary data indicates that average returns could be vaguely in the range of 5% per month, at which rate an investment of 10ish billion isk only returns 500 million. That is not a lot of money, so if I'm going to do this I need to reduce the effort involved to practically nothing.

In theory I can interact with my trade hub/s as little as once every 90 days - that being the time that it takes for sell orders to expire - and that should probably be my goal. The process might look something like this:

1. Stock a system.
2. If you run out of an item, double the number you keep on market and restock.
3. Repeat #2 until you go upward of 90 days without restocking.
4. Every 89 days minimum, adjust orders by 0.01 isk to reset the expiration timer.

If I were end up using that method, it would be really convenient if my stocking tool could tell me which items I've run out of. This feature took all of 60 seconds to implement. 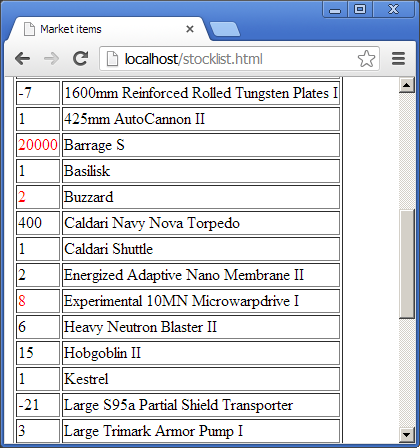 Posted by Parasoja at 8:47 PM No comments:

I haven't gotten around to finishing my trade profit tool, but I have made actual progress on the the trade front for the very first time.

I put together a list of items using k162 space's list of high volume pvp items, modified so that it provides only 150 items, so that it provides a few other items (mobile warp disruptors, capital fuel, etc.), and so that you can assemble a working generic pvp fit for all the ships it provides. With 150 items per hub I can theoretically operate up to 12 trade hubs with my 6 characters, jump clones allowing.

I picked a system in Syndicate that happened to have a decent volume of kills in the last 24 hours to set up in. There's at least one other real hub in the region, but whatever. Set up cyno characters (with jump clones, so I can jump back and forth to my building/research area).

The items total about 10 billion isk, and moving them in took 5 trips with a jump freighter. Now we just have to wait and see if it's worth the effort.
Posted by Parasoja at 12:07 AM 2 comments:

Regarding the capital market: It's back, baby

No idea how long it will last, but right now things are looking acceptably shiny for us builders.
Posted by Parasoja at 6:25 PM 4 comments:

Manufacturing: Full stop (is now over)

One of my secrets is that I'm actually pretty bad at my building things. My process is good at keeping itself running, but  it relies on me to keep track of what's actually in it. This means that if I e.g. install a manufacturing run and forget to mark it as in progress, I can easily end up with things -- minerals, components, ships -- in the process that shouldn't be there. And it's really hard to identify these without bringing manufacturing to a complete-ish halt and waiting for everything to finish.

It has been over a year since the last time I did this, and capital prices have been fairly stagnant lately, so a few weeks back I put a hold on new runs. I've just now gotten to a point where I'm pretty sure I've identified what extras I have in the process, which are as follows:

tl;dr I can lose track of multiple capital ships and not even notice.

Anyway, with that over I guess it's time to get things moving again.

I'm RL busy, and barely logged in this month. Unsold ships and blueprints are building up in my hangars because I haven't been putting them on the market.

I still managed to turn a profit, though, even after 4.3 billion in off-spreadsheet expenses from plex and from pimping my proteus.

I'm putting a temporary pause on manufacturing. It's been running for more than a year without a real audit, and I'm pretty sure there are some things in there that I've lost track of. 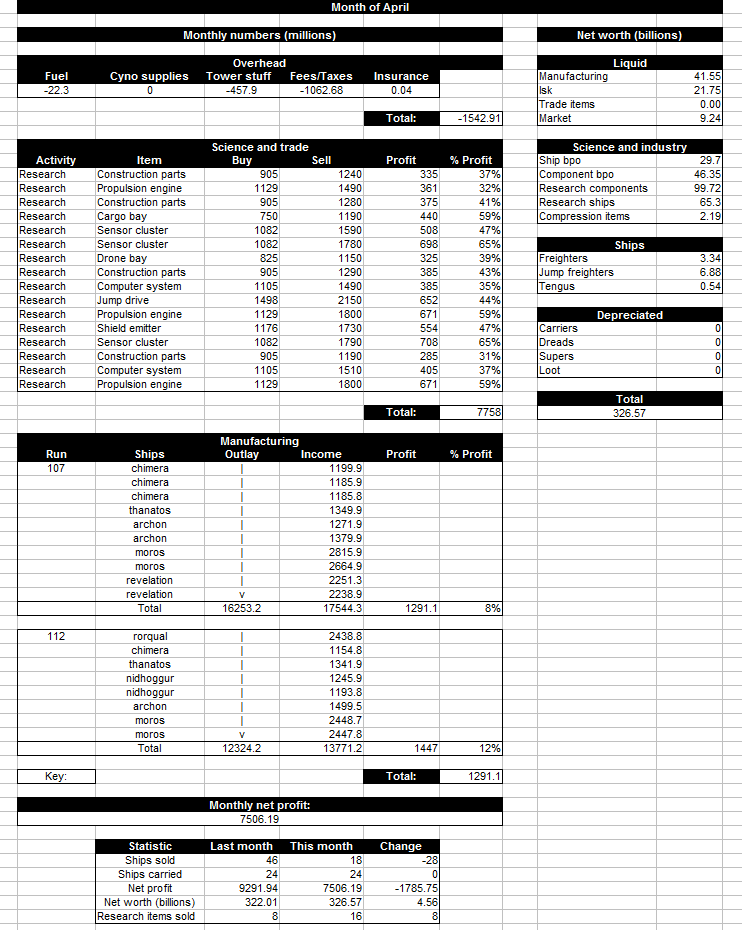