I checked various locations, and have found that it is substantially cheaper to research blueprints in player-owned outposts. In light of this I have decided that I will be putting optimal research into my hull blueprints, which would have been very expensive in highsec.

There are plenty of outposts in providence where anybody can dock. The trouble is that player-owned outposts don't always stay under the control of the same players, so it may at some point become impossible to dock at whatever outpost I do research at. Fortunately, this issue can be solved by keeping a ship and jump clone in the station. All my characters will have a clone there, and I've decided that three of them will have blockade running tengus: One to evac blueprints that finish quickly, one for slow blueprints, and one scout who will inevitably be locked out when I undock without noticing that system ownership has changed.

Also of note, research implants are useful now. If I research my nyx bpo to ME10, a 5% implant will save me 300 million.

I probably won't research my nyx bpo to ME10.

Anyhow, I've got my hull prints in an outpost and am moving characters into position now.
Posted by Parasoja at 12:23 AM No comments:

What happens to industry jobs when the station they're in gets conquored?

Anybody know? I'm looking at starting up research again, and the answer to this question has impressively dire implications. When I unrented an office recently it said that any jobs installed from that office would fail and be delivered to impound, rather than completing first. An ownership change presumably unrents offices, same as it revokes clone contracts, and according to evelopedia items in impound are undeliverable if the new owners don't allow you to rent offices there.

Research costs real money now, so if jobs from personal hangars also fail, that's pretty bad for me. If the blueprints are then delivered to impound, that's very, very bad for me. So if anybody has an answer to this, please share.

Alternatively, if anybody knows somebody who owns a station and who would be willing to experiment, we should be able to test this just by playing with standings.
Posted by Parasoja at 6:03 AM 5 comments:

"The price of labs crashed, obviously, so I'm going to have to wait to sell those."

Like a week after I wrote that I slapped myself upside the head and worked out how much labs cost to build. The answer is 55m. 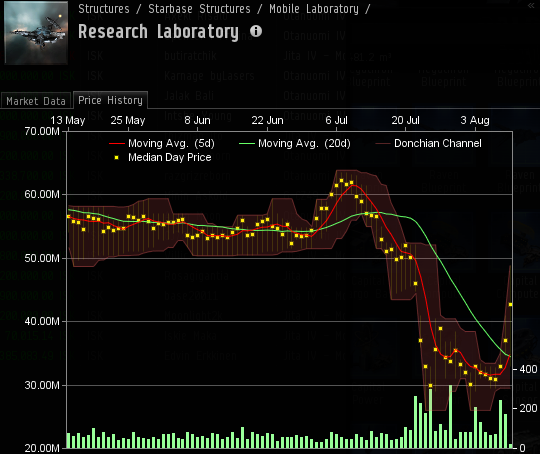 Posted by Parasoja at 1:21 AM No comments: 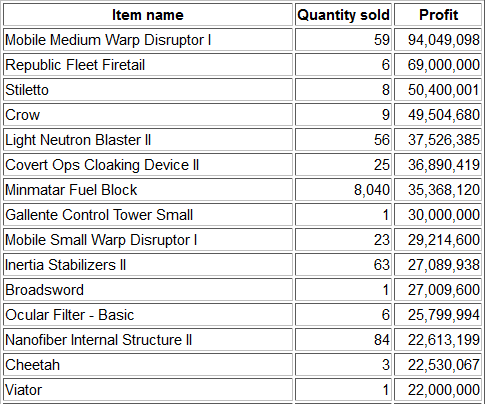 This month I had a competitor on the station, trying to undercut me on about half my sell orders. I've already re-priced my modules twice, and I suspect it won't be too hard to win once I decrease my profits enough. I don't think he can sustain this for long -- I have sources for making a profit even when module prices are low, while he seems to have logistics problems, either using blockade runners or chartering Black Frog. Once he stops making money the price war will be pointless for him, same as the ones I've met before. Just another parasite to squish.

A monthly profit of 2.6% on an investment of 50b sounds small, and it is. Thing is it's a long term investment. When I abandoned my trade project I just left my stuff on the market -- and almost all of it sold eventually

Black frog moves a maximum of 5b at a time, and charges 4-16% of a freight contract's collateral. If a trader uses them, their profit margins will be reduced by that much.

Any questions for the contributor can be left in comments.
Posted by Parasoja at 11:24 PM 1 comment:

About a month ago somebody approached me about a trade project he was running, wanting to share his numbers while remaining anonymous for ~opsec~ reasons.

Similar to my own project from way back, he's running an NPC nullsec market hub to supply primarily the local pvp types. The goal of this sort of thing is to achieve good margins with extremely low effort, and the tradeoff is that actual monthly volume is pretty low. In contrast to my project he's gone much bigger: He stocks at least twice as many item types (300ish), and many more of those items, keeping a total of about 70b (50ish at Jita price) on the market. He has also refined the process by establishing rules about not buying things that are selling above average in Jita, and overstocking things that are selling substantially below average.

The contributor has given me the API keys of his market characters, and will be available to answer questions. My role is to use the API keys to work out how much he's making and to maek post. I've sorted out a trade tool which, while imprecise, seems to be more or less working, so we should have some data for you shortly.
Posted by Parasoja at 2:03 AM No comments: