So I got to talking with some guy in lowsec, and long story short I’m now part of The Initiativedot.


I know, I know. But I like the sound of some of what they’ve got going on. Their fleet numbers are relatively small, but they have some nice doctrines and they actually use them. I’ve already gotten on some decent kills. 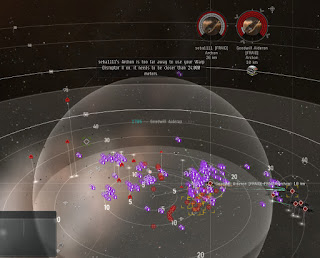 I'm bad and only got on two carriers before dying, but apparently we killed like eight.
Posted by Parasoja at 2:46 AM No comments:

I didn’t have any luck finding targets with the corp finder. I was looking at 50-100 man corps, and I’d add like half the characters to my watchlist and be lucky if even one was online. Happily, a reader chipped in and gave me a different strategy: Sit off the undock of a mission station and check out the corps of passersby.


Doing this for an hour or so gave me several decent target corporations that always had a few people online, so I declared a couple of wars and did my thing. Scout, locator agent, DPS, no problem, right?


Turns out people don’t like losing ships. I caught one five-month-old character in a battleship, but otherwise both corps just noped the fuck out. The first one, all but one character just stopped logging in. The second also mostly stopped logging in, and when they did they only flew fast warping stuff. Even when my pvp character wasn’t logged in.


Being able to completely shut down a corporation for 50 million a week is plenty amusing, but what I really want is to be rolling in killmails. I don’t think I’m going to get that this way.

Something came up, though. Updates to follow.
Posted by Parasoja at 9:18 AM 2 comments:

In the spreadsheeting business, this is what "aww fuck, everything is broken" looks like.

For once, though, it's not my fault -- turns out somebody broke rebalanced megacyte and crokite, I assume out of a desire to be an asshole. And, of course, a few months from now they're going to break everything again when the next capital changes come out. Horay.

Anyhoo, now I have to do a second check run before publishing.
Posted by Parasoja at 8:33 PM 7 comments: 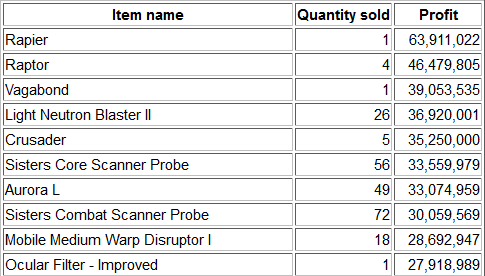 After reaching the tenth golden line, gold itself loses its shine. Victory loses its taste, and with mind not allured by material illusions I can fully concentrate on goals close to my heart.

Hagakure is a great book.

I think this is what it looks like when somebody starts winning eve.
Posted by Parasoja at 10:01 PM No comments:

So I figured I'd start out my 'pvp' thing in the shallow end, do some highsec wardecs. Trouble is, I can't find any damn targets. Figured I'd use corp finder, add some characters to my watch list, and just use locators. It hasn't really worked out -- the only corporation I've been able to find that had anybody online, they were all in lowsec. Figure I'll try a few more, then call that route an unmitigated failure. Anybody have a better idea?

In the meantime I've got an example run in progress for my capital guide. Since I'd like somebody to actually see that when I post it, I've re-submitted eve-fail to evebloggers. Unfortunately, it's not clear that that site is actually active. Guess we'll see.
Posted by Parasoja at 7:54 PM 8 comments: