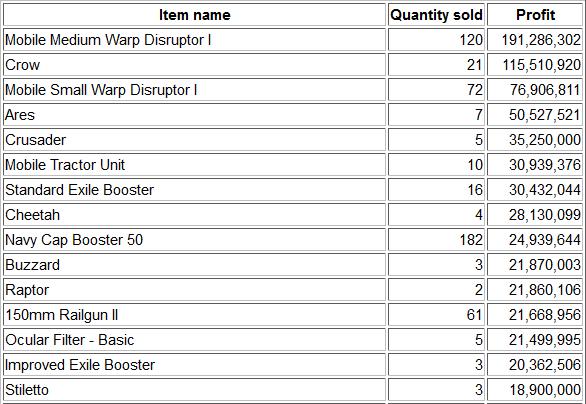 I sold some of my assets and expanded market litle bit more with medium sized ships and modules. Some less frequently sold modules already made a little profit, so I guess the move was in right direction. Other than that, I bought a few sets of industrial blueprints. They are pretty cheap to buy, don't cost a lot to upgrade, and make a nice profit from 3-10 mil per slot per month (at least in my experience)

I also expanded my family by 1 character. I plan to skill him out for blueprint research, planetary interaction (which i am currently building up at my system), and upgrading his science and research agents (maximum efficiency 6 lvl 4 agents can make profit about 18-25 mil per character per month -- not too good, but completely passive income).

The difference in profit between this month and last is 1.1%. I'm thinking it can only possible be that consistent by chance, but I guess we'll see.

People seem to like the mobile medium warp disruptors. They were the most profitable item last month as well.

Also, the contributor is apparently amusing himself by swatting other players in his system, forcing them to dock up and buy from him. He included a killmail and some market data in this month's update, but anonymizing it enough to post would have meant blacking out everything.

Any questions for the contributor can be left in comments
Posted by Parasoja at 6:26 PM