Suddenly, railguns. Thousands of them. 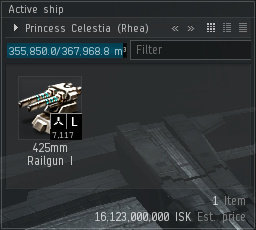 One run worth of railguns. One of the smaller runs -- most end up producing slightly more than one jump freighter worth of rails.

This is nominally fine, since I also move mods and fuel to sell, but I am thinking of reducing the number of ships per run from 10 to 8 for this reason. Also because they would compress a little faster (the latency is higher than I'd like, since I'm doing compression in jita), because I wouldn't have to split jump drives into 2 manufacturing runs, and because 8 is 2^3.

I should have a post out about compression sometime in the next month.
Posted by Parasoja at 1:32 PM