Three days ago I made this post, in which I mentioned that I had sold a moros for 2.96 billion, when two days earlier they had been selling for 2.2

When there are zero of something on the market, the first person to put one up gets to pick whatever number they like. There are two schools of thought about what to do in this situation:  One is to pick an obscene highball figure, just in case somebody goes for it. Something like four billion, in this case. The other is to pick a number that is within the realm of sanity, hoping to sell before more units come on the market at a lower price. Say, 3 billion. Maybe 3.2 or 3.5 if you really want to push it.

The five individuals who put up moros hulls subscribed to a third school, a school of non-thought. They actually lowballed, picking a number which was only 400 million (18%) above mineral price.

While their hulls were still on the market I finished a second moros hull, having held the previous one nearly 10 days before it sold. I put it up for 3 billion.

By way of illustration, here is the market graph from the last 10 days: 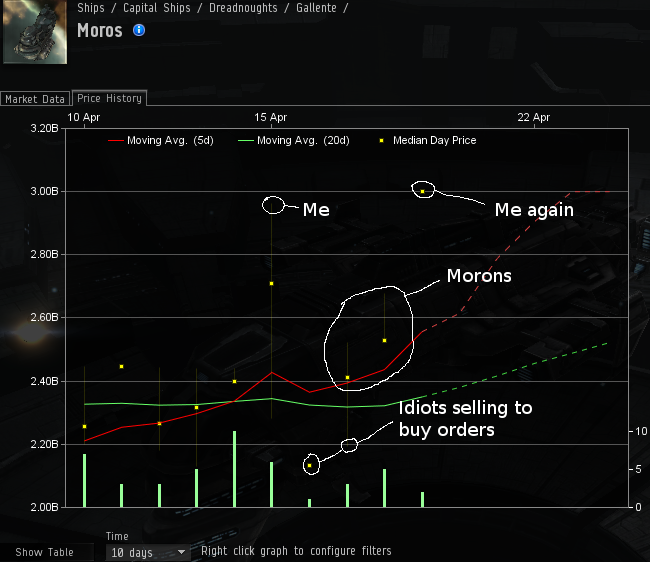 Counting two sold to buy orders, seven hulls were sold between my own two sales. The drooling morons who sold those hulls pissed away around four billion isk between them, just because they couldn't be bothered to put any thought into it.

In conclusion, it is your duty as a person who likes money to highball in a seller's market.

Labels: industry, market, when to hold