Okay, let's say that you have a bunch of capital blueprints. You want to move them from point A to point B, and sooner or later one or both of those points is going to be in lowsec. How can you do this safely?

-Some people might think that a cov ops frigate is a good tool for this job. If you think this, you deserve to die without ever understanding how or why.
-A stealth bomber, fit for tank, would be measurably less bad but still woefully inadequate. Similarly a cov ops hauler.
-People exist who use orcas to move high value cargo, since they have high EHP and the corporate hangar bay cannot be scanned. Some of them even do this in lowsec, using the cloak-mwd-warp trick to evade camps. The latter individuals are idiots.
-A stealth recon would be a good possibility, but you can still do better.

My solution is thusly: 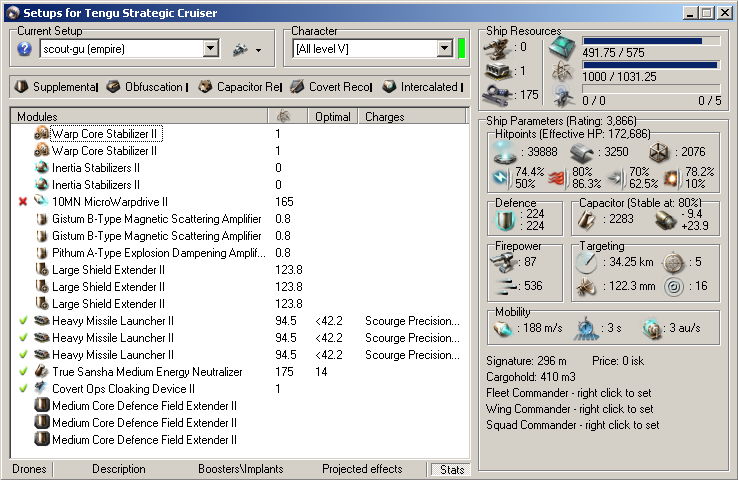 Note: Without the interdiction nullfier subsystem, this fit is not appropriate for nullsec.

I have been using blockade running tengus similar to this for years. I won't say I've never been targeted, or even shot at; but I will say it only happened when I allowed it to, and that I have never once been in danger.

Of course, caution is still due, so don't afk in jita with billions in your cargo. Also, people who aren't familiar with cloaking should practice to see how quickly they can hit cloak after initiating warp without it failing to engage. That skill will save your life.


Go to part 6: Spreadsheets
Posted by Parasoja at 1:19 AM