Minerals aren't falling as quickly as I had feared, so I'm back to buying mins to build with.


All my replacement and new component blueprints have finished researching and are in production.

I finally got around to creating my fifth building character. I have been blagging under the name "parasoja" since 2009-ish and only now have a character with that name.


In previous posts I have talked about increasing the number of ships per run, which will lead to me moving more minerals less often and reduce some spreadsheet overhead. I have been doing 4 ships per run, and was thinking of changing that to 6 or 8. Then I tried a run of 6 and noticed something:

When building 6 ships, you need more than 80 of many components. 80 is the "correct" number of components at which to split a run between two blueprints, because 80 (actually 89, so there's some leeway) components takes the same amount of time to manufacture as a carrier or dreadnaught hull. So if you install runs in a timely manner and split batches of more than 80 between blueprints, things will run smoothly.

Now, when installing 6 ships you need more than 80 of nearly all components. This is obnoxious because of the way I format split runs, and because most of them were barely more than 80, like 90-some.

I decided to resolve this by further decreasing granularity to 10 ships per run and changing the split run formatting to a multiple-column arrangement, so each one color-coded cell equals 80 components (except for the rightmost cell). This means that I will have far fewer runs in production at a time, each run will take up more space on my spreadsheet, and I will move much larger amounts of minerals at a time. 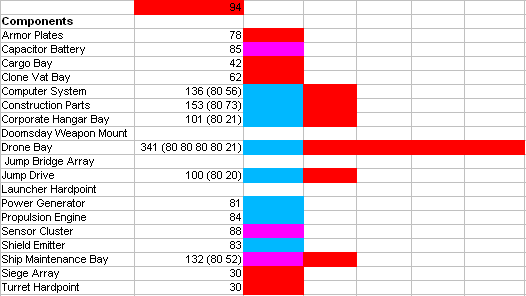 The first 10-ship run was mostly carriers, and the minerals ran 12.8 billion isk.
Posted by Parasoja at 4:26 PM